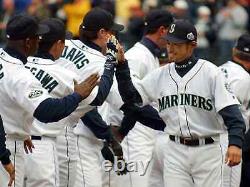 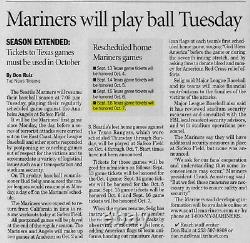 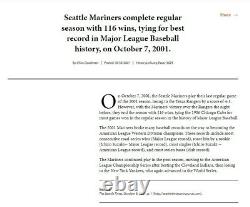 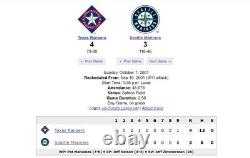 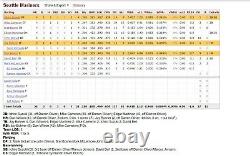 This is an Original 100% Authentic Full Ticket from the 2001 MLB Season. October 7, 2001 Seattle Mariners vs Texas Rangers at Safeco Field in Seattle, WA.

SEATTLE MARINERS 116 WIN SEASON FINAL GAME MARINERS TIE MOST WINS in MLB HISTORY!!! MLB ROOKIE SEASON HIT RECORD. THE MOST HITS IN A SEASON BY ANYONE SINCE 1930!!

350 BATTING AVERAGE and 56th STOLEN BASE. 2001 MVP, ROOKIE OF THE YEAR, GOLDEN GLOVE, SILVER SLUGGER AWARD, ALL-STAR!! 350 batting average and 56 stolen bases, Ichiro was the 1st player to lead his league in both categories since Jackie Robinson in 1949. The season included hitting streaks of 25 and 23 games, an appearance on the cover of Sports Illustrated, and intense media attention on both sides of the Pacific.

Ichiro was the 1st rookie to lead all players in voting for the All-Star Game. That winter, he won the American League Most Valuable Player and the Rookie of the Year awards, becoming only the second player in MLB history (after Fred Lynn) to receive both honors in the same season. Ichiro is also the only player in major league history to have won an MVP, Rookie of the Year, Gold Glove Award, Silver Slugger Award, all while starting in the All-Star Game in the same season. HR #310 (LAST REGULAR SEASON HOME RUN). LAST REGULAR SEASON HIT, RUN, RBI, HR, STRIKEOUT.

However, with the Mariners' victory over the Rangers the night before, they end the season with 116 wins, tying the 1906 Chicago Cubs for most games won in the regular season in the history of Major League Baseball. The 2001 Mariners broke many baseball records on the way to becoming the American League Western Division champions. These records include most consecutive road-series wins (Major League record), most singles (Ichiro Suzuki - American League record), and most stolen bases (club record). The Mariners continued play in the post season, moving to the American League Championship Series after besting the Cleveland Indians, then losing to the New York Yankees, who again advanced to the World Series. ULTRA RARE FULL SEASON TICKET IN NEAR MINT CONDITION!! You get the ticket in the photos. Ticket measures 2-1/8 x 6 Inches. BOX Section 132 - Row 35 - Seat 9.

Tickets for the postponed Rangers games will be honored on a one-to-one bases, as follows: Sept. 13 tickets will be used for admission for the Oct. This item is in the category "Sports Mem, Cards & Fan Shop\Vintage Sports Memorabilia\Ticket Stubs".

The seller is "24-hof" and is located in this country: US. This item can be shipped worldwide.